Ever have a lemming – a polish you’ve wanted so badly since you heard about it that you stalk all the stores you can think of in hopes of finding it?

Sally Hansen Hidden Treasure was the Where’s Waldo for me.

And I never found him, despite checking all the Shoppers Drug Marts, Loblaws, Rexalls, and drugstores near me for about a year. Hidden Treasure, indeed!

It was hard for this nail addict to accept that I’d never get my hands on this puppy. But then a wonder of wonders, a miracle of miracles happened. (Good time to use a Fiddler on the Roof reference.)

Mellinail from Nail-Anon surprised me out of the blue with Hidden Treasure in a RAOK (Random Act of Kindness)!

Through the bubble wrap, I saw the flakies sparkling. My heart literally started to beat faster. No, it couldn’t be, I thought.

But after tearing open the wrapping, I squealed with delight. I rarely squeal, but I did when I saw this. (And I was walking on a busy street with lots of people. Think I scared some of them with my loud, random noise.)

A huge thank you to Mellinail for this wonderful surprise and gorgeous polish! Also, I really appreciate how you’ve been so supportive and kind. The opalescent flakes are too beautiful! 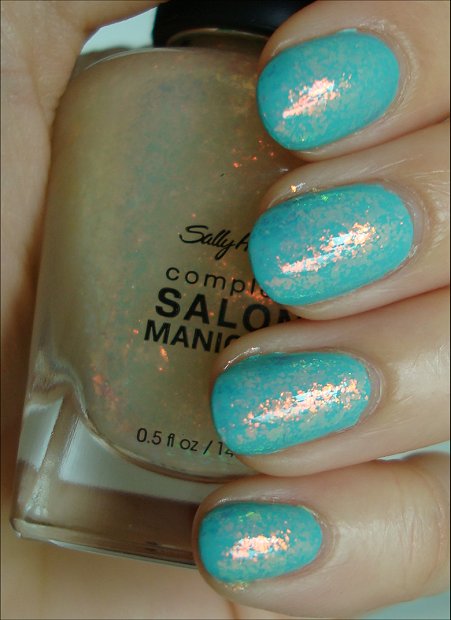 Flash – (Check out how the flakes in the bottle light up!) Indoors – Natural Light (This best shows all the colors) ? Nourishing care (It didn’t dry my nails out, but not sure if it nourished them.)

The Sally Hansen Complete Salon Manicure in Hidden Treasure is a mesmerizing opalescent flakie polish. It has a mother-of-pearl quality to it that reflects different colors depending on how the light hits it. (Check out the first macro photograph to see all the colors better.)

In the bottle, the flakes have a milky hue that flash mainly orange and yellow in the light. If you look at them at an angle, they appear slightly pinkish.

On the nail, the flakes come out to play and are a whole other animal when you layer it over another color. When it’s worn solo, it’s very sheer.

Since I wore Nubar 2010 over a dark polish (NARS Zulu), I decided to try Hidden Treasure over the manicure I was already wearing – China Glaze For Audrey!

With dark colors, the green, yellow, orange, and red really pop. With light colors, you get similar colors that you see in the bottle.

I do prefer Hidden Treasure over a dark polish, but I appreciate how pretty and ‘icy’-looking it made For Audrey look.

Sally Hansen Hidden Treasure has a thick-yet-liquidy consistency. The application is easy to control, and because of it being thicker than an average polish, you should only need a single coat to get dense flakie coverage. (But if you want it incredibly saturated, go ahead and use a second. I used only one in the above swatches.)

I waited about 15 minutes after applying this and tested to see if it was dry. I thought that the flakies would make it dry faster since with glitter top coats, that usually is the case.

It was slightly tacky, and because I’m impatient, I slapped on a coat of Seche Vite Dry Fast Top Coat to expedite the dry time. (You may have different results, though, because it was hot and humid, so that may have prolonged the dry time.)

Some people love this brush and some people hate it. The brush is flat and is slightly tapered at the tip. I’m not really picky about brushes, so I liked it and didn’t have any trouble with application.

I really like how at the bottom of the handle, there’s a built-in rubberized ring. This makes it very easy to open, even if the polish dries up at the bottle’s neck.

Normally when a bottle’s hard to open, I’ll wrap an elastic band around the handle to give me better leverage. The Sally Hansen Complete Salon Manicure bottle makes that unnecessary! Yay!

This polish is Big-3-Free as it doesn’t contain Formaldehyde, Toluene, or DBP. Good news for those who are watching their ingredients.

Since this was a special polish only around for a limited time, it’s pretty hard to track down now. People sometimes sell it on eBay, but the price mark-up is high. If you want it really badly but don’t want to pay eBay prices, I highly recommend snatching Nubar 2010.

If you see Sally Hansen Hidden Treasure on a store shelf, snatch it up as quick as you can! Consider it a sign that it was meant to be! Haha…seriously, though, this is one of the stars in my 370+ nail-polish collection. It truly is a treasure, but hidden? Not so much because I plan to wear this several times!

(Thanks again, Mellinail for your generosity!)

Do you have Sally Hansen Hidden Treasure or Nubar 2010? Which is your favorite flakie polish of all time? What are your most beloved layering combinations to use with flakies?